Working within the tech bubble it's clear how pervasive the big third party clouds are and how much data they are able to collect when you hand over ownership of your digital estate. To see how practical it is without third party clouds I chose a week when I was on holiday to disconnect. I don't use Microsoft, Facebook or Apple so that left Google and Amazon.

It's important to note that I already use my own cloud for a lot of services and I had all this equipment already set-up. There's nothing here that's completely new to me so I knew it was feasible, what was new is the scale of the commitment - a week away from home is a thorough test.

I was also taking a week off work so that significantly reduced my reliance on third party clouds - I'm not sure how feasible this would be if I was working.

When disconnecting from third party clouds it quickly becomes clear that you lose out on convenience, the big cloud providers put a lot of time and effort into making things easy to use and have set the bar very high.

One out - all out

Something I found early on when using devices that aren't connected to third party clouds is that when you take one device out there's a strong incentive to move all your devices out: rather than try and sync third party and own clouds it's easier to use your own cloud everywhere and drop the third party even on devices where it is supported.

Having been using Linux as my main desktop/ laptop operating system for a number of years this wasn't an issue on that front.

However, on Android not having access to the Google Play Store radically limits the number of apps available and this is a major hurdle that has to be cleared for disconnecting from their cloud.

Amazon's app store does provide a number of apps that cover some of the more popular apps but as I'm also disconnecting from their cloud that's not an option.

The mainstay of my personal cloud apps are from F-Droid, a catalog of FOSS Android applications that provide enough additional functionality to make a device useful.

Web apps theoretically negate the need for native apps delivered via app stores but, whilst on desktop the situation isn't too bad, on constrained devices the situation is still pretty poor. This ranges from sites that still don't provide a viewport optimised layout to behemoths that "require" a supported version of Chrome to (slowly) run megabytes of JavaScript.

There are a few services that offer web apps that work well enough to be replacements for native, Twitter's web apps provides all the basic functionality needed to engage with brands their service and Trello's web app is an excellent case study on how to provide all the key functionality in a fast and usable manner.

When you're using their ecosystem you don't notice the amount of DRM being used by content providers: most digital content is rented, not owned. Notable exceptions to this for the media I consume are Amazon's DRM free MP3 downloads for music, 2000AD's DRM free comics and Osprey's DRM free ebooks.

I read a lot on my Kindles but books I've bought through Amazon are all encumbered with DRM. It is possible to jail break them but for this exercise I stocked up on out of copyright books that are freely available. This exercise has highlighted to me that I need to try and find a better source of DRM free books - especially fiction.

As I've already got most of my information in my own cloud I didn't have any significant issues here. There was one occasion where something I wanted to work on was in Google Drive and, had I not committed to this disconnection regime, I might have been tempted to continue to work on it there rather than exporting it into my own cloud. 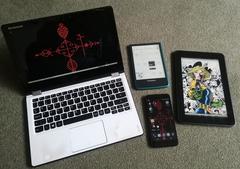 My feeling for this is that it's about five years behind where things are with the third party clouds although, as the saying goes, this isn't evenly distributed. This may seem quite a lot if you're in the tech bubble but for the majority of people, whilst less convenient, it's still entirely practical and there was nothing I couldn't find an alternative way to accomplish.

Whilst I'm not completely renouncing third party clouds from this day forward, this exercise has proved to myself that I'm not totally reliant on them and the small extra effort to use my own cloud when possible is worth it.

Whilst third party clouds are used for tracking, disconnecting from them does not mean you aren't being tracked. Granted, it will significantly reduce your footprint but if you want freedom from tracking and anonymity that's a separate subject.