Tesco have entered the tablet market with the release of a 7" Android device called the Hudl. Having worked on defining the responsive strategy for Tesco Bank I was particularly keen to have a look at this device.

Whilst the Hudl is billed as a 7" tablet, there is some variation in size within this categorisation. Its physical dimensions put it between the 2013 Nexus 7 and the iPad Mini. I have large hands and yet still find the iPad Mini is almost too big to easily hold in one hand but, whilst not as compact as the Nexus 7, the Hudl has a textured back and distinct chamfer that makes it easier to grip. The Hudl is heavier than both the iPad Mini and the Nexus 7 but not enough to make a real difference.

With a higher pixel density, the screen on the Hudl is noticeably clearer than the iPad Mini. I'm not sure that the Nexus 7's super high pixel density actually provides a real benefit.

One clear advantage of the Hudl is that it has a microSD expansion port that allows you to expand the storage in a far more cost effective manner than either the iPad Mini or the Nexus 7. It also makes it much easier to get large amounts of media files onto the device. Further enhancing its ability as a media player is the Hudl's microHDMI port which makes it possible to connect it to a television with an inexpensive cable. Rounding out the ports on the Hudl we have a 3.5mm headphone jack and a microUSB port which also serves as a charger.

The processor is fine for most tasks but does seem to struggle at times, especially if there is a background process running.

The camera is the least impressive aspect of the device: it's listed as 3MP and it's sluggish to respond to movement, seems to produce quite grainy images and struggles with contrast levels.

As there is no auto brightness option I can only assume that an ambient light sensor has been omitted to keep costs down.

Unlike the Kidle Fire with its completely customised interface, the Hudl has very few and unobtrusive additions to stock Android 4.

The main addition is a Tesco launcher that is activated by an icon in the bottom left of the screen. This occupies the full screen and has quick links to the main areas of the Tesco estate, either via swiping through the main UI or via a menu that comes out from the left of the screen. 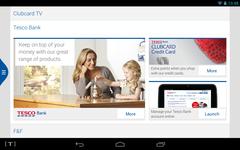 Above: Main launcher UI, this is activated by the "[T]" icon on the left of the system bar at the bottom of the screen. 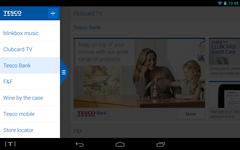 Above: Menu access to the launcher items, this can also be used to re-order the items.

Aside from the stock Android apps, the only other apps that come pre-installed are six Tesco apps: blinkbox, blinkbox music, Clubcard TV, getting started guide, groceries and store locator. Whilst the launcher cannot be disabled, these pre-installed apps can be disabled which removes them from the apps list. A number of these apps also provide home screen widgets, most of which are added to the homescreen out of the box. 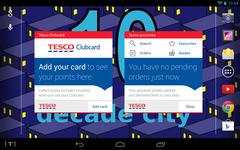 With the inclusion of Tesco's streaming film service, blinkbox, and Clubcard TV - which provides advert supported free access to television series and films - this device is definitely aimed at media consumption.

One of the pre-installed apps is the getting started guide which provides well written tutorials explaining how to use most aspects of the tablet. 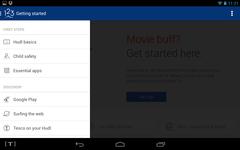 For someone who is familiar with Android most of this will be redundant but, for someone new to using a tablet, this is a really good and comprehensive introduction to the using the device. It has a guide to using the device as a media player, including how to use apps like blinkbox, Clubcard TV, YouTube, and iPlayer and also how to transfer media from a PC, use an SD card and an HDMI cable, and has links to purchase the hardware required via Tesco direct. 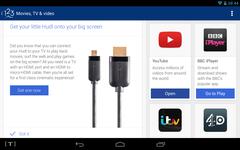 Emphasising the child friendly nature of the device, the getting started guide contains a section on how to set up content filtering, secure app purchases, and creating a secondary - restricted - account for children to use. 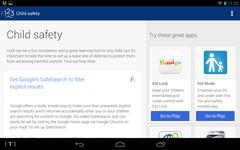 Tesco have added an additional account provider that allows system level integration for Tesco services such as blinkbox, grocery and Clubcard. It seems that only one Tesco account can be set up on the device at any one time. 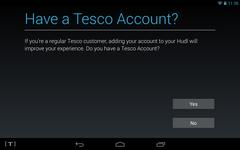 Whilst the Hudl is not in the same class as high end 7" tablets, such as the Nexus 7 and the iPad Mini, it's also not in the same price bracket - it's less than half the price of the iPad Mini. The 7" Kindle Fire HD is now being advertised at the same price as the Hudl and it might seem like a more obvious competitor but, by providing a stock Android experience with minimal and unobtrusive customisation, the Tesco device is a much more attractive option. With the built in media apps (blinkbox and Clubcard TV), the SD card reader and the HDMI output, it is an inexpensive and capable media player. The low price point and emphasis placed on child friendly setup would also make this an excellent device for children to use - anecdotally I know several people who have already bought their kids a Hudl to use so that they can re-claim their iPads!

Whilst not providing real competition for the high end 7" tablets, the Hudl offers excellent value for money. It would be a great device for people new to tablet ownership and families that want a child friendly device.

Whilst investigating the Tesco services I noticed that the direct website went to a responsive site rather than the fixed width desktop site or the very poor Usablenet powered mobile site. Doing a bit of investigation I found that by using a Hudl user agent ("Mozilla/5.0 (Linux; Android 4.2.2; Hudl HT7S3 Build/JDQ39) AppleWebKit/537.36 (KHTML, like Gecko) Chrome/30.0.1599.82 Safari/537.36") and visiting the Tesco direct site you are redirected to a responsive version of the site with, tellingly, betadirect as the base folder. It's still a bit rough around the edges but does indicate that Tesco are adopting responsive design in more areas of their estate.