Whilst some events causing recent disruption on their network appear to have been beyond ScotRail's control, the systemic failures in the way they communicate with their customers is something that rests entirely on their shoulders.

My recent experience of running a railway is limited to games of Ticket to Ride but, as a ScotRail season ticket holder and daily commuter, I have experience of being one of their customers and I also have considerable experience of building websites for mobile devices so I will focus my critique through those lenses.

ScotRail do have a mobile site but it's a very poor implementation that suffers from a serious problem - the server has no attention span, as perfectly summed up by XKCD:

This means that when, using a mobile device, you follow a link to content addressable on the main site you are re-directed to the mobile site's home page. This is an extremely poor implementation of user agent sniffing. Four years ago I built a site that used user agent sniffing but retained the URL so, from a technical standpoint, I believe I am qualified to say that it's not intrinsically difficult. There may well be challenges and maintenance overheads with the specifics of an individual implementation but a competent web team should be able to overcome these.

The ScotRail Twitter account regularly tweets links to further information about disruptions and this information is located on the web site. On the face of it, this is a good use of social media. Twitter can only convey a limited amount of information so linking to a web page allows them to convey more information to people who need it. However, this is where things start to fall apart:

It is not unreasonable to expect people who need this information to be relying on their mobile phone to access it, I know from experience as a regular commuter that when I am looking for information on delays I am invariably stuck on a train or a platform and using my mobile. The links that are posted on Twitter are to the main ScotRail site but, as we've seen above, the ScotRail server's lack of attention span means that, on a mobile, you always end up on the mobile homepage.

Sorry if you’ve been disrupted due to problems with our trains or @networkrailscot infrastructure this week: http://t.co/vHawRcN9Vl

The lack of server attention span was drawn to their attention by my colleague Craig McPheat:

Your mobile website redirects me to the homepage making it impossible to read your article. Don't apologise, fix it. @ScotRail

This solicited the classic "works for me" response from ScotRail:

@craigmcpheat HI there I have checked that link and it is working ok try this one http://t.co/GXdOoEuILy

I pointed out that, as a customer, it wasn't working for me:

@ScotRail@craigmcpheat That's still a link that redirects to the homepage when using a mobile. What's the link for that info for mobiles?

Instead of answering my question they gave me instructions on how to find the link from the mobile home page. This is a very poor response - in order to provide me with this walk through they must have known how to get the URL in question but they still didn't provide it:

@decadecity HI there on the home page, scroll down to 'Latest Service News' click on the box 'Disruption in West Central Scotland'

I followed the instructions and replied providing them with the link:

@ScotRail For future reference the link for that is: http://t.co/Q5Oji714Xe Next time you can give that out rather than directions.

This prompted yet another poor response. Directing me to the info on the home page is clearly not the help I wanted, I wanted the link to the content on the mobile site. I also hear so many apologies from ScotRail every week about things that they never fix that they no longer have any meaning: as they lack responsibility, recognition, promise or restitution they are empty.

@decadecity sorry just trying to help and direct you to the info on the home page.

I would have left it here as yet another instance of ScotRail's failure to communicate but at this point Clare Meikle "butted in". I don't know Clare but from the profile information Twitter gave me I could see that she lives in Scotland, works in communications and is followed by ScotRail. From what she said in this and othertweets it seemed to me like she works for, or with, ScotRail. However, it does seem odd to me that someone would send what appear to company tweets from a personal account, especially as (at the time of the tweets in question) there was no affiliation to ScotRail listed on the profile. I had to resort to a web search which turned up a LinkedIn profile for the "Head of Communications at First ScotRail". Unfortunately this profile is not linked to the Twitter account and the profile pictures are not immediately identifiable as the same person but I'm working on the assumption that they are one and the same person.

Here's what Clare had to say:

@decadecity sorry to butt in. I know ScotRail is working on a fix for that issue re mobiles. Will check timescales + let u know.

Given the time scales, If ScotRail are currently working on a fix for mobiles I strongly suspect this is driven by recent Google guidlines for mobile SEO. I reported this issue to them over nine months ago so if it was driven by any desire to provide a better customer experience it would have been addressed before now.

I replied to Clare with, what seemed to me, a very obvious solution:

@ClareMeikle No need to wait for a technology fix when a human fix can provide immediate triage.

@ClareMeikle The immediate fix would be to give out the right URL in tweets - even a second tweet for mobile users. It's not that difficult.

This suggestion to improve communications was gratefully received by Clare, who again appears to me to be representing ScotRail in some form via her personal account:

@decadecity Thanks. Will pass that on. Appreciated.

Frankly I'd be amazed if this suggestion is acted upon. If it is and ScotRail would like some more suggestions from me I'd be more than happy if they got in touch - I've got plenty more where that came from...

I can see a clear theme from ScotRail throughout this whole episode which exemplifies my experience of ScotRail as a corporate entity: simple things are done very poorly. There's nothing here that is intrinsically difficult, neither the mobile site redirects nor providing the right URL on Twitter, yet it still seems to be beyond ScotRail's capabilities.

Given that a Glasgow to Edinburgh annual season ticket (GBP 3512.00)* costs more than an annual season ticket for the whole of Germany (Bahn Card 100 at EUR 4,090.00), they declared a profit of GBP 20 million in 2010/11 and have consistently increased fares by above the rate of inflation, ScotRail's problems really shouldn't be of a financial nature. We've also established that the problems aren't technical in nature. This leaves me to draw the conclusion that the problems are human in nature and, in my experience, systemic human problems of this nature in a company stem from senior management.

* The reference for this is not directly addressable - you will need to fill in the search form.

Shortly after publishing this post, Clare was back in touch:

@decadecity Morning. Auto rendering is set for later this year. In the meantime we will use mobile links instead of desktop ones. Thanks.

I'll believe it when it actually happens.

Clare also replied to Craig after this page was published - 16 hours after he needed the information:

@craigmcpheat Thanks for feedback. Here's the direct mobile link to the page itself. http://t.co/jJLzlJmIBK

Credit where credit's due - I have just seen a tweet from ScotRail that directly links to the mobile version of a page:

Doesn't look so clever on a big screen though: 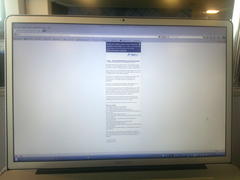 Seeing as ScotRail have adopted my solution I thought I'd work out how much to bill them at my standard consultancy day rate for the time it took me to come up with this solution: I make it less than £1.

Seems that the new policy didn't survive the weekend. Today there was this tweet to a link on the desktop site that doesn't even exist: