I have picked up a BlackBerry Z10 for my device lab and have spent some time using it to assess the new BlackBerry 10 operating system. Although there aren't many applications, as is to be expected at this early stage in its life cycle, the operating system and hardware put this device on a par with the current generation of smart phones such as the Nexus 4 and the iPhone 5.

The device is thin and light, similar to the Nexus 4. It's lighter than the iPhone 5 and slightly wider with a correspondingly larger screen. The screen is very good quality with a pixel density slightly higher than that of the iPhone 5. Admittedly I've not been using it as a phone but battery life seems acceptable, lasting two days of regular use for email, twitter and web browsing using WiFi.

Buttons are power, volume up and down, and voice control.

It has MicroUSB, MicroHDMI and MicroSD ports.

Out of the box it is easy to set up on WiFi - like all other contemporary phones (except the iPhone) no SIM card is needed. A BlackBerry user ID is required for the device and, if you don't have one, setting one up is a very easy process which can be completed on the device. It checks for updates and then moves on to a tutorial showing how to use the operating system gestures - this is informative but not interactive which is a missed trick in my opinion.

I have tested the mail app with an address hosted on Google Apps and it detected the settings automagically based on the email address entered and synced calendar and contacts as well as mail.

When first started the home screen shows the list of applications in the now familiar grid view. Once you start using applications it then switches to showing last used applications with the list view coming in from the right with a swipe. 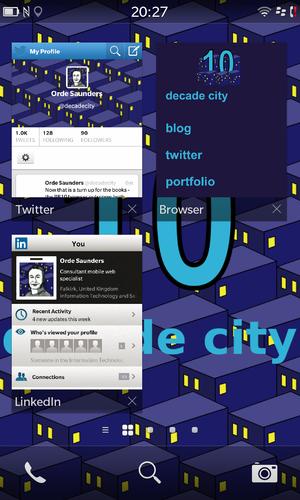 One of the main features of the operating system is the swipe gestures from off screen and, unlike Windows 8, these are well realised. The main gestures are:

Whilst not in the same league as a physical keyboard, the on-screen keyboard is good and, once you get the hang of it, the swipe up to complete a word is easy and useful. My biggest issue with the keyboard, and this is shared with the iOS keyboard, is that it always shows the letters in capitals regardless of the case of the input. 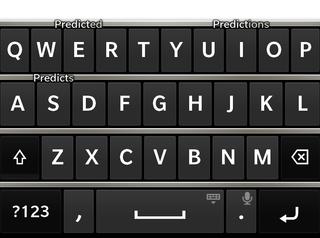 The browser is WebKit based and is fast and responsive, even when loading pages that are heavy with adverts and JavaScript. It is notable for scoring higher than Safari on iOS 6 and and Chrome on Android on both the HTML5 and CSS3 tests.

The browser features a remote debugger that works with desktop Chrome over the network and this gives a full set of dev tools. Incidentally, I like that the TCP port for this is 1337.

A number of services are supported with clients out of the box, namely: Twitter, Facebook, LinkedIn, Dropbox, Evernote and Foursquare. I haven't used all the integrated services but the ones I have used are well executed.

There is Docs to Go Microsoft Office file viewer which I've not tested but it offers options to create new documents as well as view existing documents.

One of the main selling points of the BlackBerry 10 operating system is the integrated messaging system known as "BlackBerry Hub". This provides an integrated view of all services that have registered to integrate with this component. This is well executed and is always available with a single gesture no matter what you are doing (see above). I can see this being very useful for managing multiple high volume information sources.

There is good Twitter integration out of the box but an official Twitter app can be installed to provide the same UI as on other platforms.

With the corporate marking being a key area for BlackBerry it's not surprising to see LinkedIn integration and, whilst following the same design as the Android app, it seems to be better executed.

Dropbox is well integrated and is available as a second file system in file dialogues.

The biggest drawback is the lack of applications available in the BlackBerry World store. There are a number of games available including big names such as Star Wars Angry Birds but little else of interest that I could see. However, as BlackBerry is known for its excellent developer outreach, I expect this situation to improve in the near future.

There is a range of content in the form of music film and TV available through the BlackBerry world store.

This device is clearly aimed at, but not exclusively suited for, the corporate market and is what BlackBerry users have wanted for some time: a BlackBerry that doesn't suck. In fact, lack of applications aside, I think this is as good as the Nexus 4 and better than the iPhone 5.