One of my heroes, Graeme Obree, gave the keynote at the launch event of Glasgow University's sport and wellbeing week - these are my notes from his talk.

I'm a bit surprised to Back at Glasgow Uni after being here for weeks - barely a month - as a student.

I would normally do a presentation about my career starting with my school days. I hated sport - especially rugby! I really took to cycling when I found a cycling club. We need to get people leaving school with some form of identifiable sporting background.

I wanted to cycle mainly to get away - I used to day dream about explorers who went over the next horizon. I left school with chronic low self esteem and no prospect of a job.

In a club you tended to get dragged along until you get dropped out the back, there was a high wastage rate - 9 out of 10 people didn't come back. Every time I wanted to last longer without being dropped until I was dropping people.

I sat in bike shop with no customers thinking about Newtonian physics in regard to time trialling. Others want to win races - I needed to win them.

The basics are resistance vs power output. I decided to train harder - no: better. I reduced air resistance by removing arms from air flow by turning the handle bars upside down and rode up and down.

My financial outlook was "How will I pay for beers on Friday". I was winning races for price money and was in a comfort zone for three years in 1989. The Commonwealth games was a wakeup call - I had to be winning at British level not just at Scottish level. I decided to get the British hour record then I beat Boardman at the Champion of Champions race - then I in was in my comfort zone again for two years until Boardman won the Olympics.

I wrote to big companies with a copy of cycling weekly cover that had me on it and asked for sponsorship to break the amateur world record but ended up with personal debts after the sponsorship deal went south. I decided to turn my back on cycling then decided to break THE hour record - Moser's all time altitude record. The decision was as sure as lifting this bottle to my mouth. I knew I wasn't good enough but knew I could make myself as that Italian dude had two arms and legs and I have two arms and legs and I will suffer more for it. You can't do something until you believe you can do it but you can't believe it until you've done it. I projected that I'd already done it.

The pivotal point in my career was not breaking the hour record and then breaking it the next day. There was too much pressure on the first attempt. The hour record is second only to winning the Tour de France. At the first attempt I broke the sea level record but it didn't count for anything, the pain of that failure for 30s was too much so I decided to go again. That pain was needed to unlock a new level - life saving energy. I needed that to go from 99% to 99% athletic effort and the next day I broke the hour record.

I went home to three film crews. I completely miss-managed the situation as I didn't have a manager. It's a life changing experience like winning the pools and your world melts down. The Belgians offered thousands of pounds to ride exhibition so I went off with my bike in a backpack. In the West of Scotland cycling scene people thought taking an aspirin was doping but in Belgium the pros were asking what drugs I used to break the hour record. 93 was airport to airport to airport for events, sometimes two in a day with no warm up, no warm down. Once everyone had seen the sporting monkey the attention died down. In 94 I was disallowed at world championships, none of the comissaires wanted to be on the front of the Gazetta de la Sport as the one who flagged me and I wasn't going to stop so finished my ride and was then disqualified by Verburggen.

The Flying Scotsman - a good film, the most important thing is the main character survives to the end.

I signed for Le Groupment - eight thousand pounds of drugs were offered for two grand which was advertised as a perk of being on the team. I refused and was never approached by another cycling team.

Old faithful - it does feel how it looks.

The maximum to my mind is a cage and I want to touch both ends of the possibility spectrum. Came up with the superman position where the body is an arch - locked in place and all power can go to pedals, no shilly shalling about. It took one day in my garage. Showed the position at a number of top level events so they couldn't say it came from nowhere and people had plenty of opportunity to copy it but they didn't. At events people were asking where my team were, I said: "I am team!" Then I won the worlds in 95.

My ego brought me down in 96, I wanted to beat someone in the national 25 (they had possibly urinated in my bed at an event). I was ill for three weeks after that and it ruined my games - my form was bad and others were taking drugs - drugs make 10-15% difference.

Eventually I started to appreciate what I've achieved. Everybody will know someone who is depressed. Imagine you are in a hotel and there's a fire in one room then the sprinklers go off in all the rooms - depression is like that. Medication makes the sprinklers better, it suppresses what you can't handle but you have to deal with the fire eventually. Speak to pals but don't come on heavy as you'll loose all your pals. If you know a depressed person then phone them, picking up the phone is too much of an effort for them. My advice on depression is that there's place for a good mope, everybody enjoys a good mope and you get it of your system. That's when you deal with what's really hacking you off.

In 2010 was in Sainsbury's and decided that I needed to come out of the woodwork and got my mate Chip to manage me. I thought I needed a project, tried out going for the hour record on the new old fashioned bike but couldn't do it. Then I decided to go for the land speed record and starting by building a bike in my kitchen. This is a no lose situation - going out to inspire kids in schools. I've seen all these things - global warming? we were all going to freeze to death in the 1970s. It's a no lose project to inspire young people, and it's going to be fast, and it's going to be amazing. 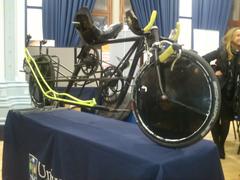 I've been thinking about this and there has to be a better bike design - bikes aren't as accessible as they could be. Need to keep you dry and have a battery to help you get places without getting sweaty. Recumbent won't work as people don't feel safe as it is, they want their head at the highest point.