Update: This feedback was solicited by Comixology and thier "Brain Ninja" said thanks.

DISCLAIMER: I've made a lame attempt at humour but this is more than a little harsh. It also features more than a few swears. If you work for Comixology and don't take criticism very well then I suggest you go somewhere else.

OK, so I've got time to spare and I want me some comics action. I'm reading Al Ewing's excellent run on Jennifer Blood and I'm wondering if there is something new to read in this series so I fire up Comixology on my tablet in order to get my read on and what am I greeted with? 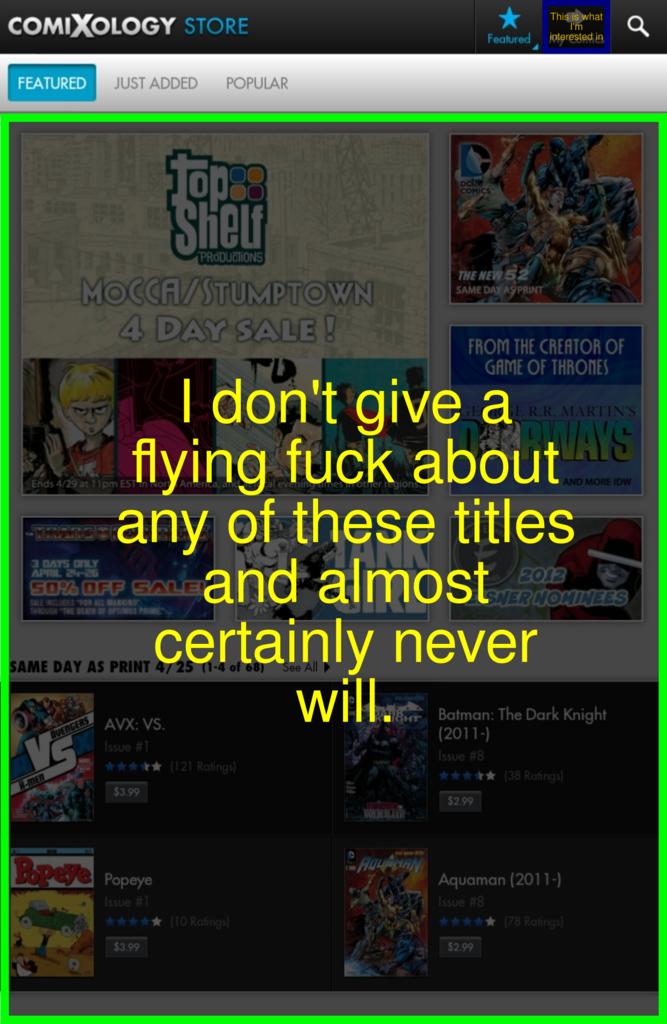 Did you see what I'm actually interested in? I wouldn't be at all surprised if you missed it - it's that little square highlighted up there in the top right.

Whilst we're here I thought I'd take time to point out the laughably named 'Quick Links'. They were hiding at the bottom of all that junk I said I didn't care about. If I wasn't taking the time out to rip into the usability of this app I would never have bothered to look down there.

So I've found my comics. We all know they're not mine in any meaningful sense - they're yours and you just let me look at them in exchange for money.

OH N0ES! This isn't all teh comicz - I know I've paid the comic pimp for more services than this. 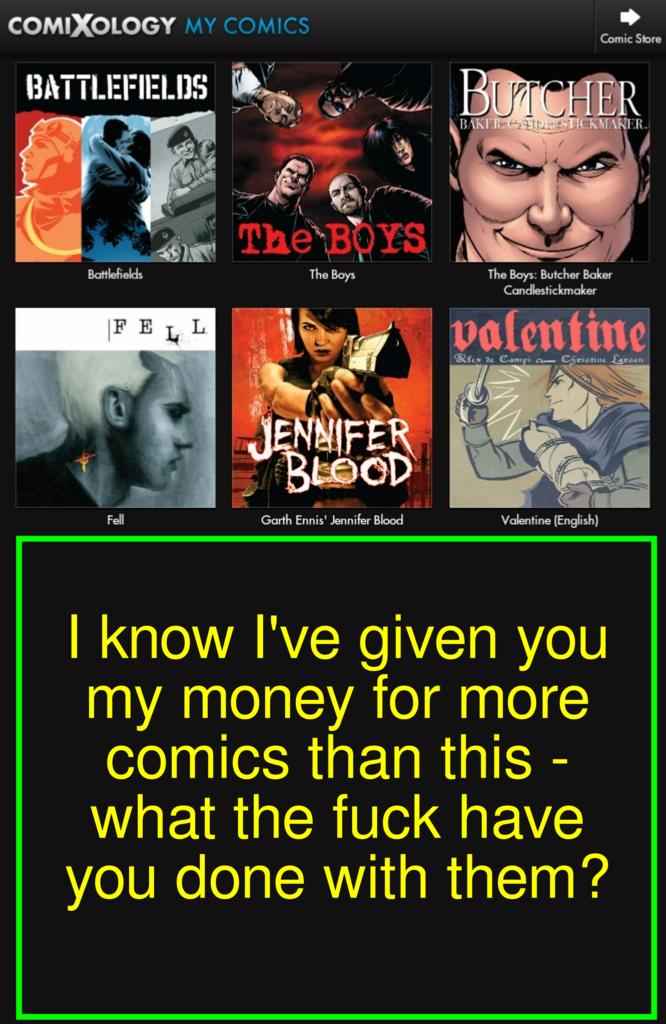 Oh, well. At least Jennifer Blood is there - I'll go to a torrent site and get the missing ones, that way I know they won't go missing again.

Right, so I'm in the Jennifer Blood series now and... wait! What! I'm sure I had more issues than this. Didn't Al start on issue 7? Oh, well - good job I bookmarked that torrent site.

Now then - what was I trying to do? Oh, yeah - I wanted to see if there was a new issue of Jennifer Blood. Surely this would be the logical place to find it, right? BZZZZZZT! Wrong. 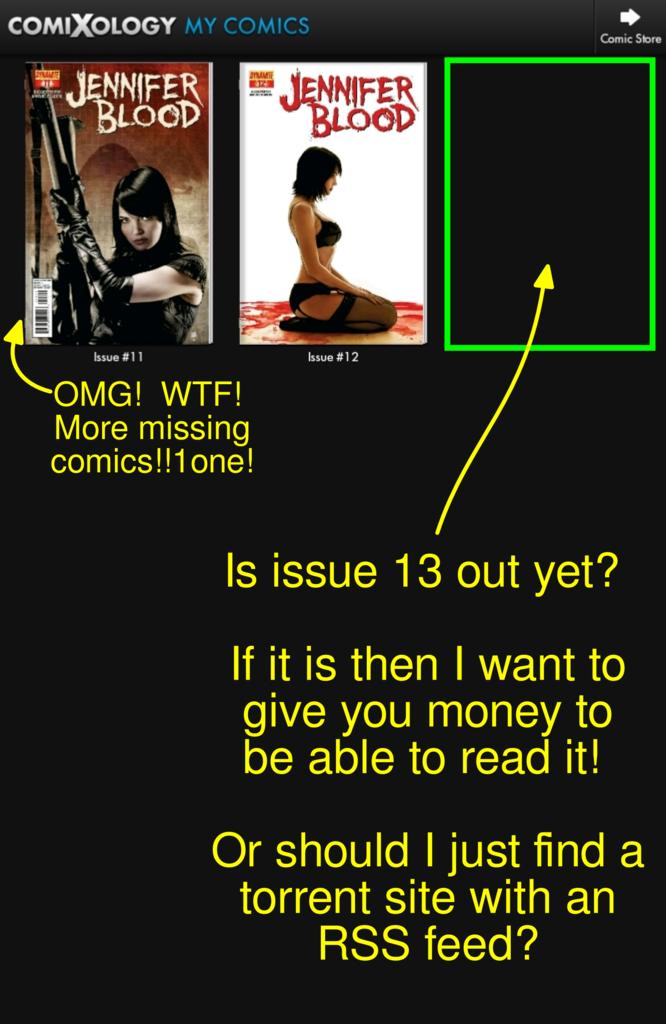 Yeah, that's right. Now I think of it I do seem to remember that the torrent site had RSS feeds which would mean I'd be automagically notified when there was new stuff available to read.

Assuming I hadn't lost the will to give you money by this point I bravely set out on a quest to find out if there is a new issue. 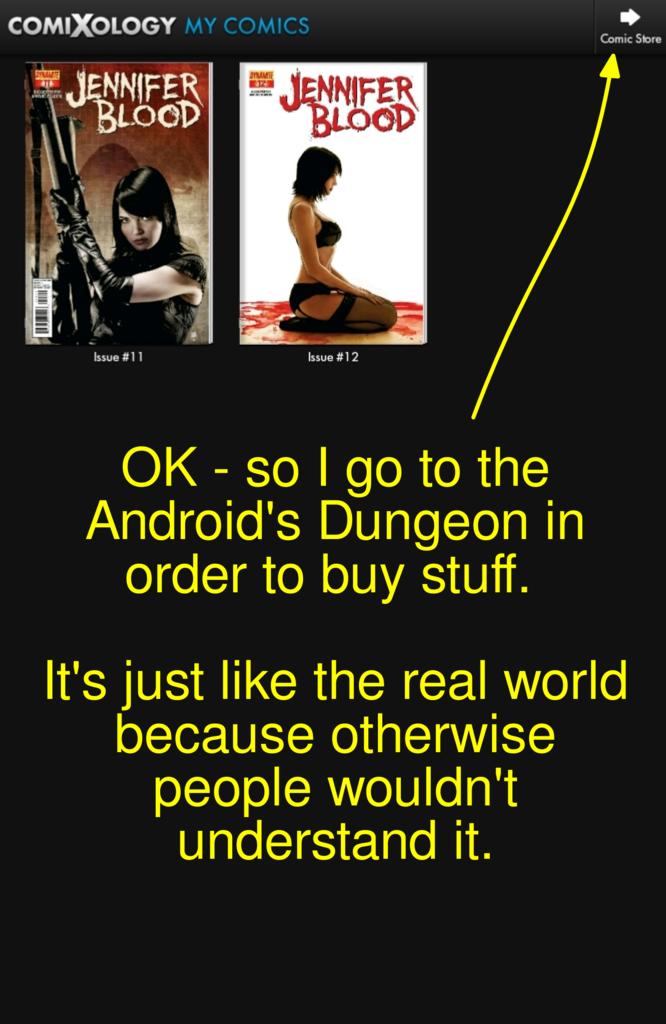 So I'm back to this. Not changed since last time I was here. Still no more interested. 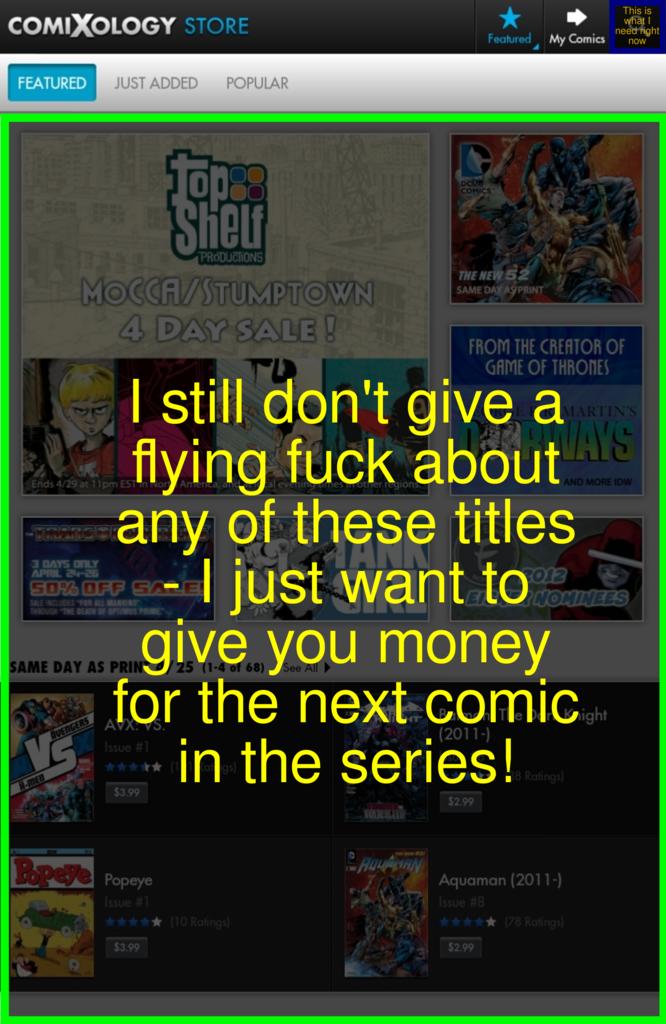 If you learned anything last time you will have noticed what I was looking for was another of the little squares up in the top right.

Somewhere in the back of my mind I seem to remember that I started out looking for Jennifer Blood so I'll type that into the search box. As I'm typing there is a spinney thing so I guess it was thinking but I've finished and I don't get what has happened now. 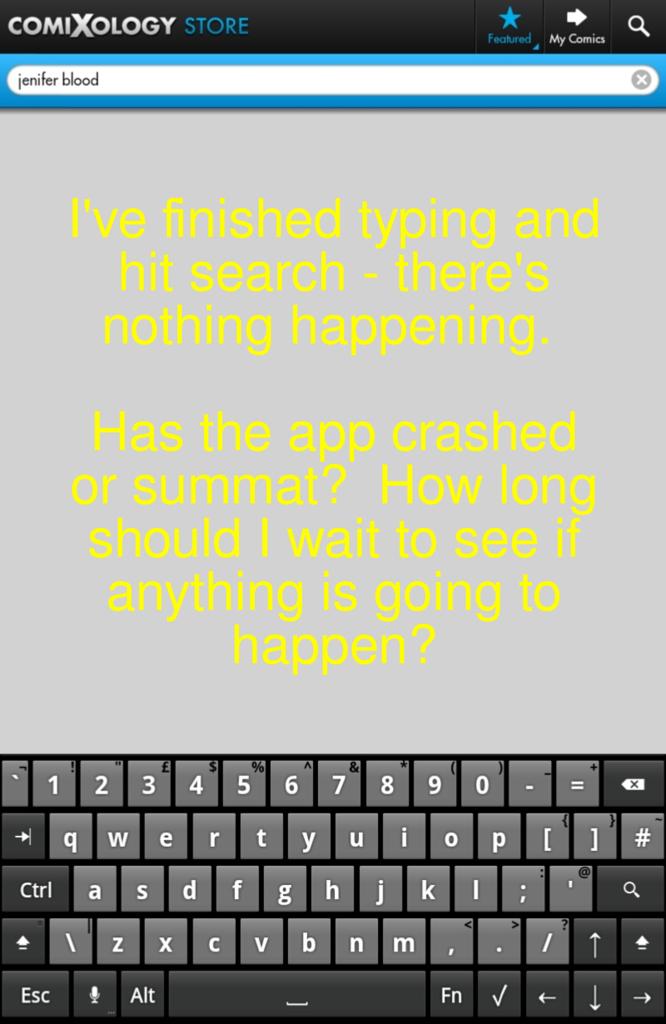 Ah, I see what's happened here - I spelt the name wrong. True story. This genuinely happened whilst I was taking the screen shots for this diatribe.

Luser error spotted and corrected I start the search again and type slower this time. The reward for typing slower than the network lag is that the spinney thing finds comics for you, like Google's instant search if it were a bit shit. 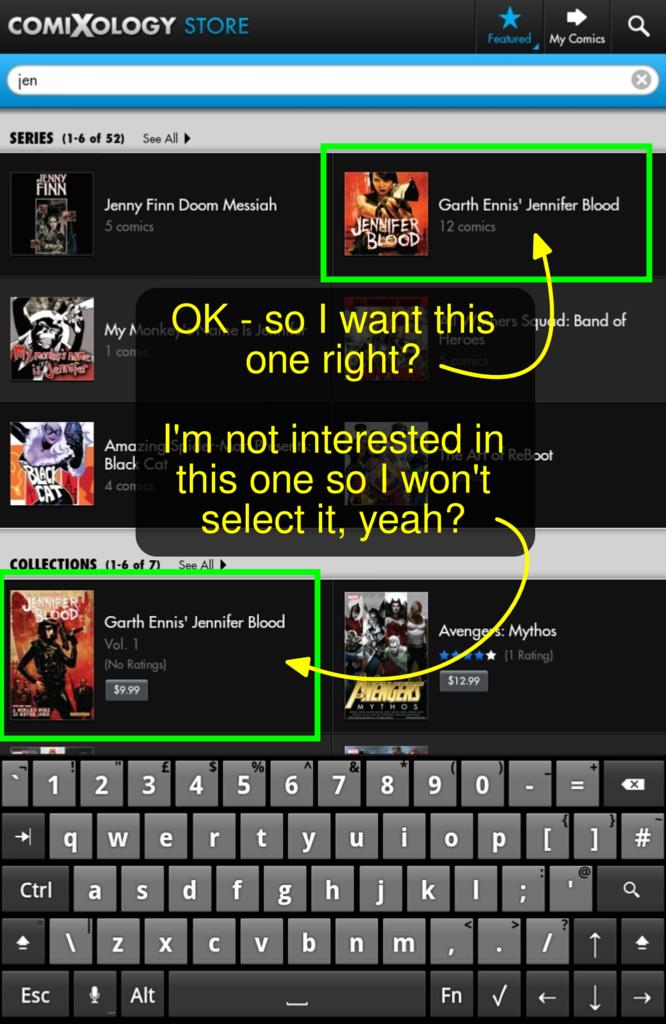 Now we are starting to get somewhere. I can feel my will to live returning.

Nope - false dawn. The one I didn't want from the last screen? It's there. Twice. But no issue 13. Cast your mind back to the start - only now do I start to get a clue that I'm not going home a winner here. But given how ass backward this has been so far I might not yet be done. 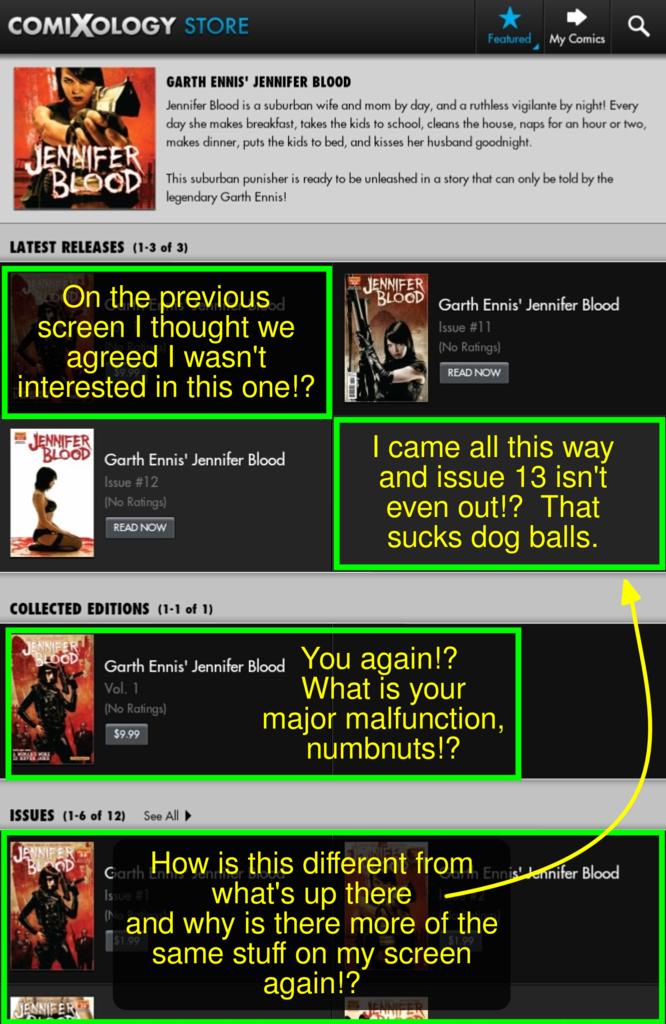 Down at the bottom of this screen is what looks like repeated information. I'm a war weary veteran of this app's weirdness now and something odd like that could just be the clue I'm looking for to find a definitive answer to the existence of issue 13.

Shit the bed! This is it. This is what I've been trying to find all this time. (Or at least I think it is. It's been so very long.) 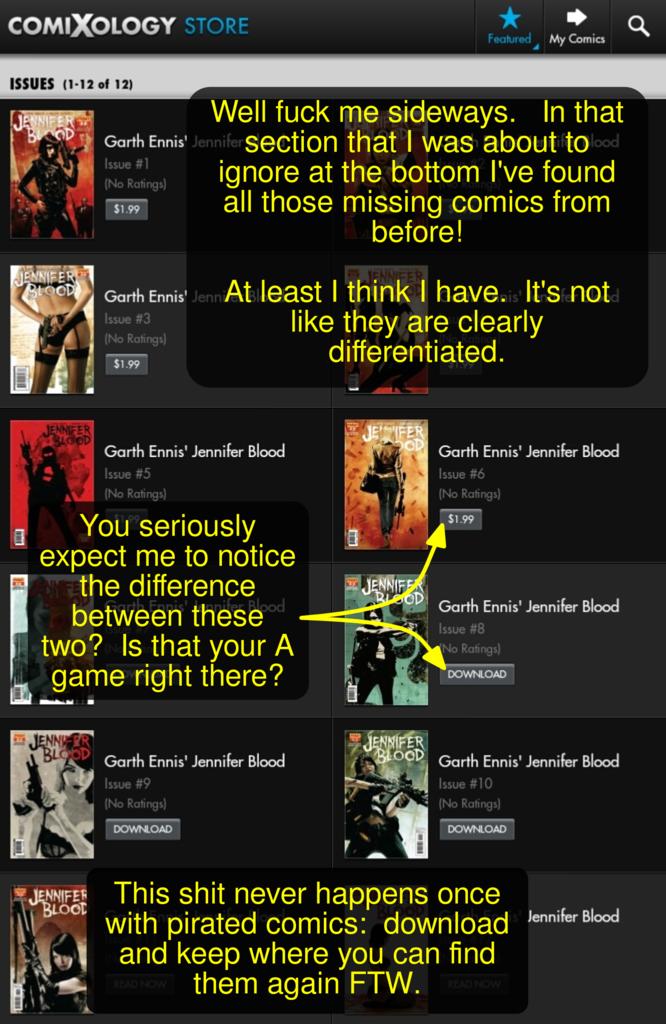 Well, we got there in the end. If Al wasn't a friend of mine I would have given up on this ages ago. Also I know that issue 12 has only just been released so 13 is unlikely to be there for a while yet. Either assume this takes place in a month or so's time or replace issue 13 with issue 12 and re-live what I went through to find out when issue 12 was released.

So you might reasonably ask why I have a number of comics in my collection? I believe the creators deserve the money and recognition for their efforts. If there is a way to get them the money and sales figures whilst I get a DRM free copy of the comic for myself then that's what I do. Speaking purely hypothetically, the best way to achieve this might be to buy on Comixology and then get a pirate copy that is actually what one would read in a free CBR/CBZ reader app that is much better designed than the Comixology app.